Despite the formal social controls (laws) regulating pornography use, all three genres of pornography remain readily available on the Internet. Therefore, this study explored at what age individuals first knowingly searched for, downloaded, and exchanged/shared the following pornography genres: adult-only, animal (bestiality), and child pornography. By examining the interrelations among the self-reported age and pornography use variables, the authors hoped to understand how nondeviant pornography use either facilitated or predicted the probability of engaging in more deviant forms of pornography.

Three primary objectives were the focus of the current study. The first aim of this study was to determine whether or not the age of onset was a risk factor for engaging in deviant pornography. In other words, are individuals who engage in nondeviant pornography use at an earlier age more likely to engage in deviant forms of pornography use compared to late onset users? The second aim of this study determined whether female respondents were consuming Internet child pornography. Previous research suggests the majority of child pornography users are male; however, the majority of these samples are from the forensic or clinical populations (c.f., Babchishin, Hanson, & Hermann, 2011). In addition, Internet-based research studies suggest women may be engaging in child pornography more than previously expected (c.f., Seigfried, Lovely, & Rogers, 2008; Seigfried-Spellar & Rogers, 2010). Thus, the current study specifically assessed the prevalence of female child pornography use in a sample of Internet users rather than a forensic or clinical sample, in order to provide a broader conceptualization of female users of child pornography (non-convicted and self-reported).

The current study utilized Survey Sampling International (SSI), which provided a panel Internet sample of both male and female respondents, who were at least 18 years of age or older, from the United States. Rather than snowballing the Internet in order to identify respondents, these clients or respondents have already gone through the SSI’s quality control and verification system in order to identify individuals who are at risk of lying on a survey just to qualify or claim any rewards or incentives (SSI, 2009). In addition, SSI prevents the same person from being able to take the survey multiple times (SSI, 2009). Most importantly, these clients or respondents were more likely to be confident in the reliability and confidentiality of this study, as well as comfortable and trusting in the research process itself, which is essential when examining attitudes and behaviors toward socially sensitive topics.

Based on the desire to sample respondents from the “general population of Internet pornography users,” rather than a sample from the clinical or forensic population, and the need to increase the respondent’s confidence in self-disclosure, this sampling methodology best met the needs of the current study. As shown in Table 1, 630 respondents completed the online survey; 502 (80%) were women and 128 (20%) were men (Note: This gender disparity will be discussed later in the paper). Overall, the majority of the sample was white (n = 519, 82.4%), between the ages of 36-55 years (n = 435, 69%), married (n = 422, 67%), and 68% (n = 427) of the respondents had completed some college or post-graduate work.

Finally, the respondents’ basic demographic information was self-reported via an online questionnaire, which included items such as sex, age, and marital status. The demographics survey appeared at the beginning of the study for all of the respondents. The current study advertised as assessing “attitudes toward adult websites,” and by placing the demographics questionnaire prior to the more socially sensitive questions regarding pornography use, this method increased the accuracy of self-reported sex for this study (c.f., Birnbaum, 2000). Also, all survey items were forced-choice, but the respondents were able to select “decline to respond” to any item, as required by the Institutional Review Board (IRB). Further, all respondents were treated in accordance with the ethical standards set forth by the American Psychological Association (APA). 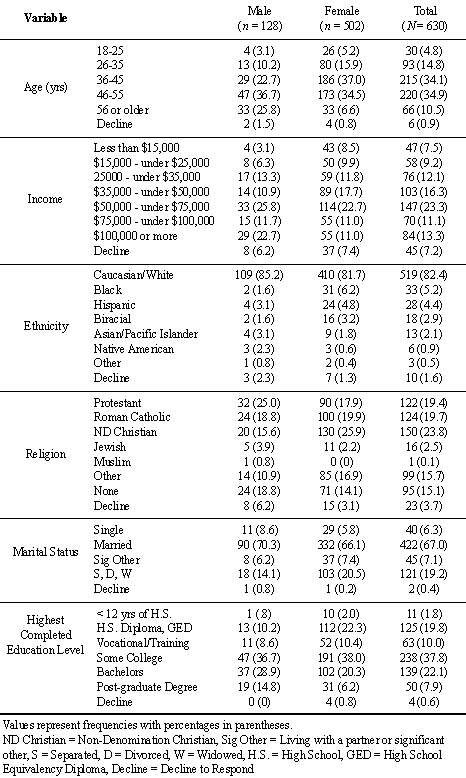 This study was conducted electronically using an Internet-based survey. This method of conducting research via the Internet has seen increasing used by researchers due to the accessibility of respondents and the perceived anonymity and increased willingness to self-disclose socially unacceptable or controversial behaviors or attitudes (Mueller, Jacobsen, & Schwarzer, 2000). Once the respondents accessed the website, the home page explained the study while acting as a consent form to which the respondents had to agree or decline to participate. If the prospective respondents agreed, they had to click on the “I Agree” button in order to participate. After clicking on the “I Agree” button, the respondents were asked to complete the questionnaires, which took approximately 15 minutes to complete.

At no time were the respondents asked for any identifying information (e.g., name). In order to protect the respondent’s anonymity and confidentiality, the respondents were provided with an ID number so responses to the questionnaires could not be linked or matched to any particular individual.

After data collection, statistical analyses were conducted using the Statistical Package for the Social Sciences (SPSS) version 19. Statistical significance was set at the alpha level of .05 prior to any analyses. The Fisher-Freeman-Halton Exact Test tested for significant relationships between age of onset, sex, and pornography type. This decision was made for the following reasons: expected cell frequency counts were small due to the study assessing rare occurrences (i.e., child pornography use), it approximates the chi-square test as sample size (N) increases, and the Fisher-Freeman-Halton Exact Test extends the Fisher’s Exact Test to the R x C case (c.f., Freeman & Halton, 1951). Finally, a backward stepwise (Wald) logistic regression was conducted in order to determine if sex and “age of onset” for adult pornography use predicted group membership for nondeviant versus deviant Internet pornography use. Logistic regressions are appropriate for exploratory analyses, for they are more robust with fewer violations of assumptions, such as small and unequal sample sizes (Tabachnick & Fidell, 2007).

Percentage of Non-Deviant and Deviant Pornography Use by Sex 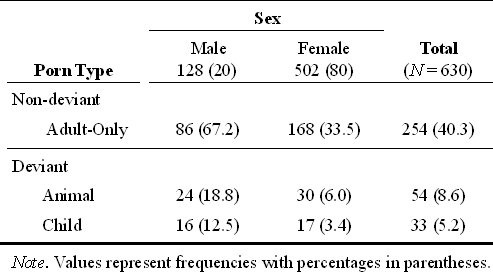 Classification of Respondents by Self-Reported Use of Adult, Animal, and Child Pornography 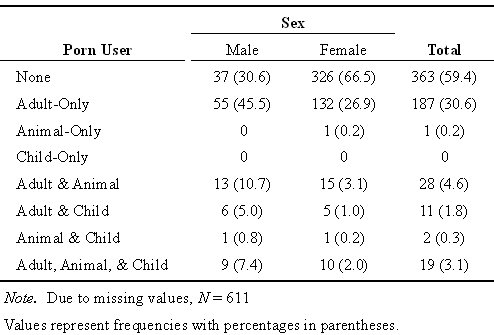 Based on the significant findings from the zero-order correlations and Fisher-Freeman-Halton Exact Test, the authors conducted a backward stepwise (Wald) logistic regression to determine if “age of onset” and sex were significant predictors of adult-only versus adult + deviant pornography use. As shown in Table 6, the best predictive model for adult-only versus adult + deviant pornography use included both variables, Sex (W = 7.69, p < .01) and Age of Onset (W = 5.16, p < .02). Individuals with a younger “age of onset” for adult pornography use were .8 times more likely to engage in deviant pornography. In addition, men were .4 times more likely to be a deviant pornography user. The Hosmer and Lemeshow test was non-significant, χ2(4) = 6.42 with p = .17, indicating the final model fit the data. In addition, variance inflation factors (VIF) and condition index values were calculated in order to test for multicollinearity, all of which indicated no cause for concern (Sex, VIF = 1.00; Age of Onset, VIF = 1.00; Condition Index < 30).

Zero-order Correlation for Sex, Adult, Animal, and Child Pornography Use 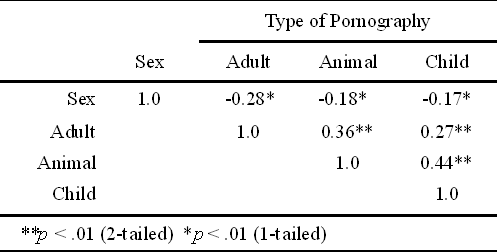 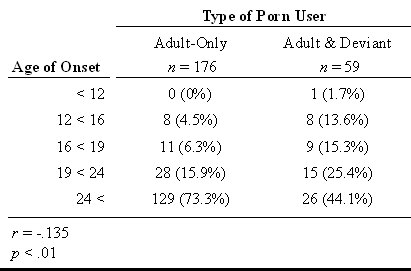 Also, sex representation was disproportionate in the current study. According to the United States Census Bureau (2009a), 50.7% of the United States population was women. When considering only those individuals who had Internet access either inside or outside their household (N = 197,871), 48.6% were women (United States Census Bureau, 2009b). Based on the current panel demographics for Survey Sampling International (personal communication, 2012), 56% of the United States Internet panel is women. It is possible the sex disparity in this study was related to the respondents’ employment status. In the current study, men were significantly more likely to be employed full-time and part-time whereas the women were more likely to be homemakers, χ2 (9) = 73.82, p < .00. Previous research cites respondents who are employed full-time and are “busy” are less likely to complete online surveys (Cavallaro, 2012). So, the sex disparity may have been due to employment status in that the female respondents who were homemakers had more time to complete the online survey. When controlling for employment status, there was a still a significant relationship between “age of onset” and adult-only versus adult + deviant pornography use, rab + c = -.28, p < .01.

Although, the proportion of women to men in the current study was not representative of the United States Internet population, it did sample individuals outside of the clinical or forensic population. In addition, the current study suggests this methodology may reveal more women who are consumers of Internet child pornography compared to other research designs (i.e., clinical or forensic population; Seigfried-Spellar & Rogers, 2010).

Finally, a recent study using the same Internet-based research design but with a snowball sample of Internet respondents replicated the findings of this study in that individuals who self-reported a younger age of onset for adult pornography use were more likely to engage in deviant pornography (Seigfried-Spellar, 2013).

International Telecommunication Union. (2011). The world in 2011: Facts and figures. Retrieved from http://www.itu.int/ict

Seigfried-Spellar, K.C. (2013, February). Replicating the Seigfried-Spellar and Rogers (2011) study on deviant pornography use by age of onset and sex. Presentation at the American Academy of Forensic Sciences 65th Annual Scientific Meeting, Washington, D.C.

"Dysregulation of metacognition has the potential to develop into maladaptive coping... which in turn, can develop… t.co/836hvLOUik